2 buckwheat: also known as buckwheat. More cultivated in the northwest and southwest mountains. It is cold tolerant, poor in quality, tastes smoother, smaller in size, thick and hard-shelled, and red in color.

3 winged buckwheat: The edges of the seed are as thin as the wings and the seeds are smaller and of poor quality.

2 Cultivation techniques. 1 Soil Preparation and Fertilization: Buckwheat is generally used as a crop replanting crop because it is sown when the crop is harvested after harvesting. The site preparation is more extensive and the number of seedlings is more. Early ploughing and grinding should be performed to facilitate seedling emergence. In the drylands and new land for wasteland cultivation, cultivating in vertical and horizontal directions after ploughing will make the seedlings easy to unearth and take root. When the buckwheat is afraid of flooding, it should be used as a sorghum in the low-lying land where there is more rain, so as to facilitate drainage. Buckwheat growth period is short, fertilization should be based on basal fertilizer, generally 3,000 to 5,000 kilograms of mushi manure, 25 kilograms of ammonium phosphate, 10 kilograms of urea. In addition to the application of manure in new land and barren land. Can also apply bone meal, rock phosphate, grass ash, chicken duck dung and so on.

2 Seeding: The seeds of buckwheat, full and fresh, should be selected. The buckwheat is chilly and frost-free, so it is appropriate to sow in mid-April. Sowing method is: on-demand seeding for the sowing of 5000-6000 acres, each hole points 5 to 10, the depth of 3 to 4 cm; seeding Mu seeding 3.5 to 5 kg. Drilling is best for ease of weeding, ventilation, light transmission, and spraying.

3 Field management. 1 drought prevention and lowering. Buckwheat is a dicotyledonous plant, and it should be promptly repressed in case of drought after sowing. The soil mash should be crushed, and the soil should be compacted to reduce the gap, so that the cultivating layer on the soil can be used to make it sprout and emerge. In the event of surface compaction in the event of rainfall, the soil should be raked so as not to damage the seedlings.

2 weeding and weeding. After cultivating the first true leaves, cultivating, eradicating field weeds and thinning seedlings, removing weak seedlings and excess seedlings; the second cultivating and weeding shall be completed every 15 to 20 days or before flowering, 30 to 35 centimeters high, and then Should not be cultivator, so as not to damage the plant.

3 chemical control. The first chemical control occurred when the plants grew to 5 to 6 leaves. The second time was controlled at 10 to 12 leaves. Each time, 25 grams of 15% paclobutrazol is sprayed on 40 kilograms of water to control the growth of the plants, preventing them from lodging.

4 auxiliary pollination. Buckwheat is a cross-pollination crop with low seed setting rate. In the flowering period every 3 to 5 days at 9 to 11 o'clock with a soft cotton rope each carrying one end, gently pulling over the top of the buckwheat, vibrating, so that the plants contact each other, in order to facilitate pollination, thereby increasing the seed setting rate and Yield.

4 Pest control. 1 Rhizoctonia: Occurred at the seedling stage and sprayed with 65% dexamethasone WP 500 to 600 times.

5 Harvest. More than 70% of the whole plant became mature brown. When presenting the inherent color of this species, it is suitable for the harvesting period. When harvesting, tie it up or tie it, put it in the room and cook it.

Black glutinous maize is a special type of maize, whose kernel cuticle deposits melanin to varying degrees, giving it a dark and shiny appearance. The kernels are rich in water-soluble melanin and various essential trace elements, plant protein and various amino acids, with a significantly higher nutritional content than other cereal crops.

The origin of black glutinous maize: coloured glutinous maize is generally white, yellow, red, purple and black, with white, yellow and purple maize being the basic colours. The purple gene of a purple-white cross naturally becomes purple if it "beats" the white gene, and vice versa, so if the two make a tie, we see white and purple maize. Purple can turn into red and black maize, or as we often say, "red is purple and black is purple". 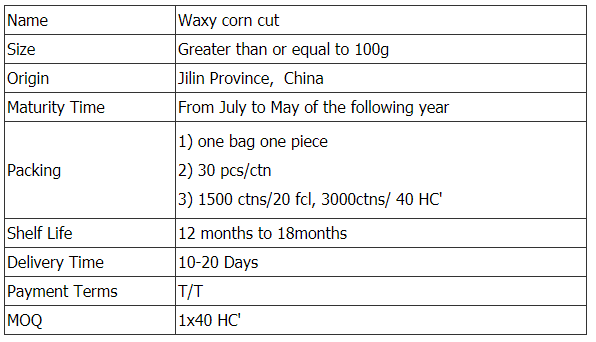