miRNAs are important regulators of post-transcriptional control that are of increasing interest. First, the miRNA binds to the Ribonucleoprotein (RNP) complex to form an RNA-induced silencing complex (RISC), which is then targeted to the target mRNA by incomplete base complementation. The UTR region, by restriction enzyme digestion, affects the stability of the mRNA or directly blocks the translation process, thereby mediating post-transcriptional gene silencing of specific mRNA targets.

miRNAs have important effects on many physiological processes, such as cell growth, apoptosis, stress response, maintenance of stem cell differentiation potential, and metabolism. It is estimated that the vertebrate genome encodes up to 1000 different miRNAs, and the researchers speculate that these miRNAs may regulate at least 30% of gene expression. Although researchers have now discovered more than 530 miRNAs in the human body, further research is needed to understand the exact cytological function of these molecules and their role in disease development.

Studies on miRNAs have shown that up-regulation or decline in miRNA expression may be related to the regulation of oncogenes or tumor suppressor genes, so miRNAs play an important role in cancer generation. In general, miRNAs associated with differentiated cell types are reduced in tumor cells, while those that are expressed in early development and stem cells are retained.

At the same time, some miRNAs that lack expression in tumors play a role in inhibiting cancer, such as:
- a low-expression of the lethal-7 (let-7) miRNA family in lung cancer, targeting the oncogenes KRAS, NRAS, MYC and high mobility group A2 (HMGA2);
-- The miR-15a-miR-16-1 cluster, which is underexpressed in testicular and mantle cell lymphoma, targets the oncogene cyclin D1. 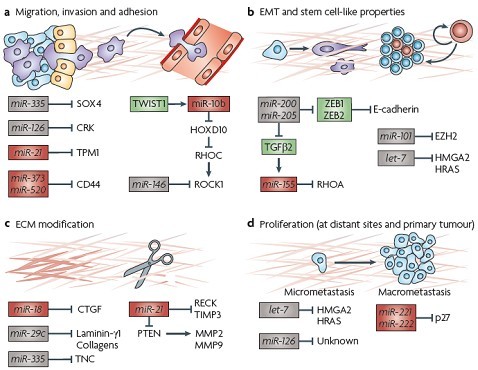 Since miRNAs are found to play an important role in cancer mechanisms, especially in relation to tumor metastasis, the most exciting research for miRNAs is promising RNA-inhibiting therapies or mimicking miRNAs in cancer therapy. Expression therapy, especially for cancer patients with tumor metastasis.

But miRNAs have hundreds or thousands of targets, so it is a very challenging task to fully understand the link between the specific response of a miRNA and a target and tumorigenesis, especially in the identification of miRNAs in cancer research. Accurate targets are still a big problem. It is known that the regulatory function of miRNAs is achieved by combining different proteins or RNAs. Therefore, studying the binding of miRNAs to proteins is important for revealing the function of miRNAs and guiding the development of RNA therapy. Dr. Robert Nakamura, CEO of Advanced Genetic Systems, as an expert in validating RNA-protein complexes as a therapeutic target, believes that "we know that RNA-binding proteins bind different RNAs under different physiological conditions. By isolating intact RNA-protein complexes from cells, we can identify specific interactions between molecules, and hopefully find ways to destroy these interactions for treating diseases."

RIP technology (RNA Binding Protein Immunoprecipitation) is a technique for studying the binding of RNA and protein in cells. It is a powerful tool for understanding the dynamic process of post-transcriptional regulation networks and can help us discover the regulatory targets of miRNAs. RIP, an emerging technology, uses antibodies against target proteins to precipitate the corresponding RNA-protein complexes, which are then isolated and purified to analyze the RNA bound to the complex. RIP can be seen as a similar application of the commonly used chromatin immunoprecipitation ChIP technique, but since the study object is an RNA-protein complex rather than a DNA-protein complex, the optimization conditions of the RIP experiment are not the same as those of the ChIP experiment (such as compounding). The substance does not need to be immobilized, and the reagents and antibodies in the RIP reaction system must not contain RNase, and the antibody needs to be verified by RIP test, etc.). RIP technology downstream combined with microarray technology called RIP-Chip helps us understand the overall level of RNA changes in cancer and other diseases. 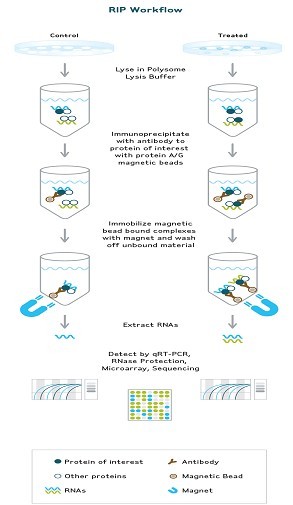 The basic principle of RIP experiment:

â€¢ Immunoprecipitation separates RNA-binding proteins and their bound RNA together

Further reading: 95% of the human genome does not encode genes, but produces a large amount of non-coding RNA. The genes that actually encode proteins account for only about 2% of the total human genome. These non-coding RNAs play an important regulatory role in all stages of life growth and development, and are closely related to various diseases such as AIDS, leukemia, diabetes, and malformation, and are involved in stem cell and epigenetic regulation. RNA-protein complexes drive post-transcriptional regulation of gene expression in almost all cellular processes, including splicing, nuclear export, mRNA stability, and protein translation, so understanding gene regulation It depends on determining the changes in the binding of RNA in these processes. Therefore, RNA research has also been paid more and more attention by scientists. It has become a hot field in life science research, and RIP technology has gradually become a routine method in the field of RNA research, helping us to understand more and more attention. Post-transcriptional regulatory network.